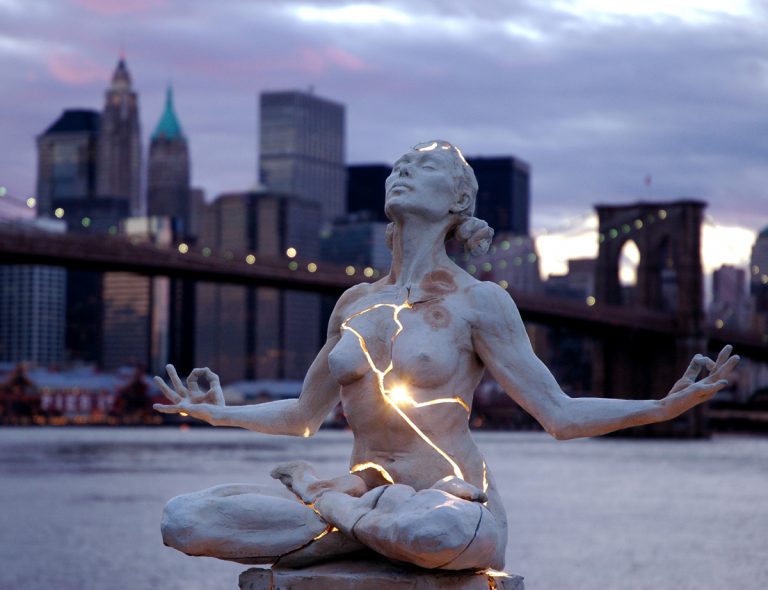 “Expansion” by Paige Bradley at https://paigebradley.com/sculpture/metamorphosis/expansion/

This incredible sculpture by artist Paige Bradley was dropped on the floor – on purpose. What followed next was a true breakthrough. A light was installed on the inside of the ruptured sculpture and created something infinitely better than the original. Bradley named her work, “Expansion.” It resonated deeply with me because it represented the biggest turning point in my personal and professional development – the moment I broke away from performance anxiety when playing the piano.

My experience of performance anxiety was debilitating and ruined countless performances for me. No amount of positive thinking or pep talking from caring family or friends could stop what was doomed to occur. Here’s how it would go down. Before performing, I would feel all the typical signs of nervousness: jittery stomach, sweaty palms, and racing heart rate. Everything seemed like an obstacle. The lighting wasn’t angled properly, and I couldn’t see the keys. The bench was too high, too low, or too wobbly. The piano was out of tune, the keys were dirty, or the pedals would stick. There were plenty of things to distract me and cast a shadow of impending failure. Then came the uncontrollable shaking. I worried the audience could see my leg shaking at the amplitude of a jumping rope! All of this was going on before I even played one note.

Then there was the expectation I placed upon myself. I overanalyzed every note, every phrase, and every dynamic. Why did I choose to go into a profession where I would be compared to Mozart, Bach, and Beethoven? Then the inevitable would happen. A mistake. Then another. And another. Every mistake reverberated in my body like a shock wave until finally I left the performance in tears.

After thirty years of playing, I finally broke like Paige Bradley’s sculpture. But like the sculpture, what came next was infinitely better than what existed before. I was preparing for a performance where I was to accompany my husband who plays trombone. It was a demanding piece by Brahms, and I loved it.  However, I really questioned my ability to pull it off. I feared the worst, and one day in rehearsal it all came to a head. I stopped in the middle of the piece and screamed, “I can’t do this! I’m such a failure!” My husband said, “That’s not what this is about, El. This is supposed to be fun.”

Later I came to realize that what he meant was, this was not a serious performance, and it wasn’t intended to be high pressure. However, at the time I heard, “This isn’t about you and your issues.” That wasn’t what he meant, but it was what I needed to hear. This music wasn’t about me and my performance anxiety. This music was about ITSELF. It had no other purpose but to BE music. That put a tiny crack between my playing and my ego – what later turned out to be a very important crack.

Next, I journaled about my playing. I realized I had so tightly adhered my self-worth to my performance that I perceived them as one and the same. Consequently, every wrong note felt like a seismic impact to my self-esteem leaving me wanting to hide in a hole from shame.  In my journal I wrote “Wrong Notes” directly on top of “Self-Worth.” Then in the next line I wrote them partly overlapping but not completely. In the third line I wrote them touching one another but not overlapping at all. This practice continued line by line until the two were on opposite ends of the page from one another. I had chiseled them apart until the crack became a chasm. When I did this, I felt like Paige Bradley’s sculpture. I had broken apart my tightly confining beliefs and created an open space of freedom.  I no longer identified who I was with how well I played a piece of music. I couldn’t believe I hadn’t seen it sooner.

On the night of the performance, I was nervous, but it was a different kind of nervous than before. I didn’t feel like I was standing before the guillotine fearing another failed performance, I felt like my ego was! I told myself that no matter how I played, it had absolutely no bearing whatsoever on who I was as a person. I knew I was at risk of not believing myself in the heat of the moment, so as I waited to go on for the performance I kept my journal nearby and repeatedly glanced at it – “Wrong Notes” and “Self-Worth” – no longer touching one another. I connected to the sensation within myself that the visual reminder provided. I connected to that crack.

I’m happy to report that the performance went extremely well.  When I made a mistake, I coached myself by thinking, “Let it go. Stay with the music.” Each note was like a breath in a meditation. Each moment deserved all of my attention and focus. Nothing was given over to the mistake of the past. That was probably the first time I had been in what so many performers call “the zone.” There was nothing else but the music – not even me and my issues. Admittedly, my ego was relieved by how well the performance went, but had I fallen on my face, I knew it wasn’t going to hurt as badly as it had in the past. That night, being broken only resulted in one thing – the expansion of shining light.

To learn more about Paige Bradley and her piece, “Expansion,” please visit her site at http://paigebradley.com/blog/the-story-of-expansion/.

Do you know someone who might benefit from reading this blog? Send it to them!